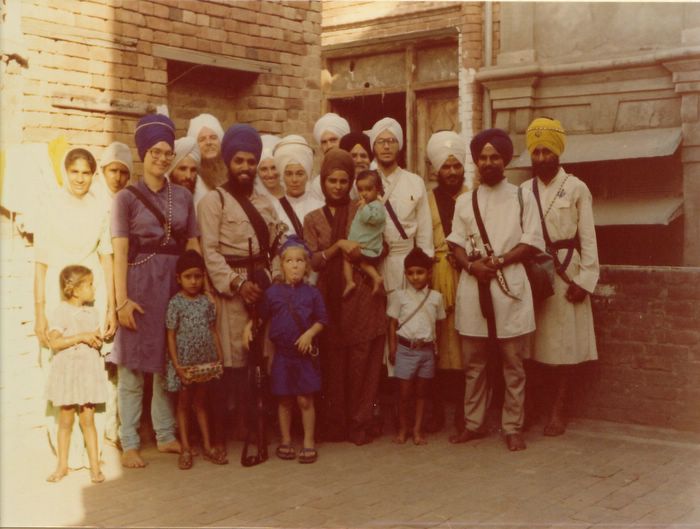 There are very few people in this world, whom we can say are a ‘tree of knowledge’; Shaheed Bhai Fauja Singh Jee was one such soul.  Continuing with our tribute to them, we are celebrating their selflessness by exploring their jeevan through the seva they did and the impressions they left behind.  As mentioned in part one of our blog on Bhai Sahib Jee- the Khalsa Panth was their life. Their passion to learn and share what they had learnt became more prevalent when they decided to start Chalda Vaheer Jatha, along with their Singhnee Bibi Amarjeet Kaur Jee.

Bhai Sahib Jee was blessed with Amrit di Daat in 1964, after having done Sangat with some of the Panth’s most ferocious lions; they were tyar bar tyar and remained that way until their very last breath. Shaheed Bhai Fauja Singh Jee was so imbued in Naam that sometimes they would sit up all night doing Simran and no matter where they were; they would make sure to complete their Nitnem.

Shaheed Bhai Fauja Singh Jee always had a passion for Guru Sahib’s Baana, having spent a lot of time with Nihang Dals and Baba Nihal Singh Jee of Harian Bela, Bhai Sahib adored the Khalsa Jeevan. They were immensely affected by seeing people wearing Baana and abusing it, therefore they decided to show people the true Khalsa way, bring respect for Baana once again and highlight the importance of it. Neela (blue) Baana was Bhai Sahib’s favourite; they used to say it had the most power and dreamt of a day when Amritsar would be full of blue Baana wearing Gursikhs. Many Gursikhs within the Vaheer would always wear Baana including Bhai Keval Singh Jee and Bhai Avtar Singh Jee. Bhai Sahib Jee and the Singhs would purposely speak in English when wearing Baana; in order to make people realise that Singhs and Singhniya in Baana can also be educated and professional, Bhai Sahib themselves were an Agricultural Inspector. 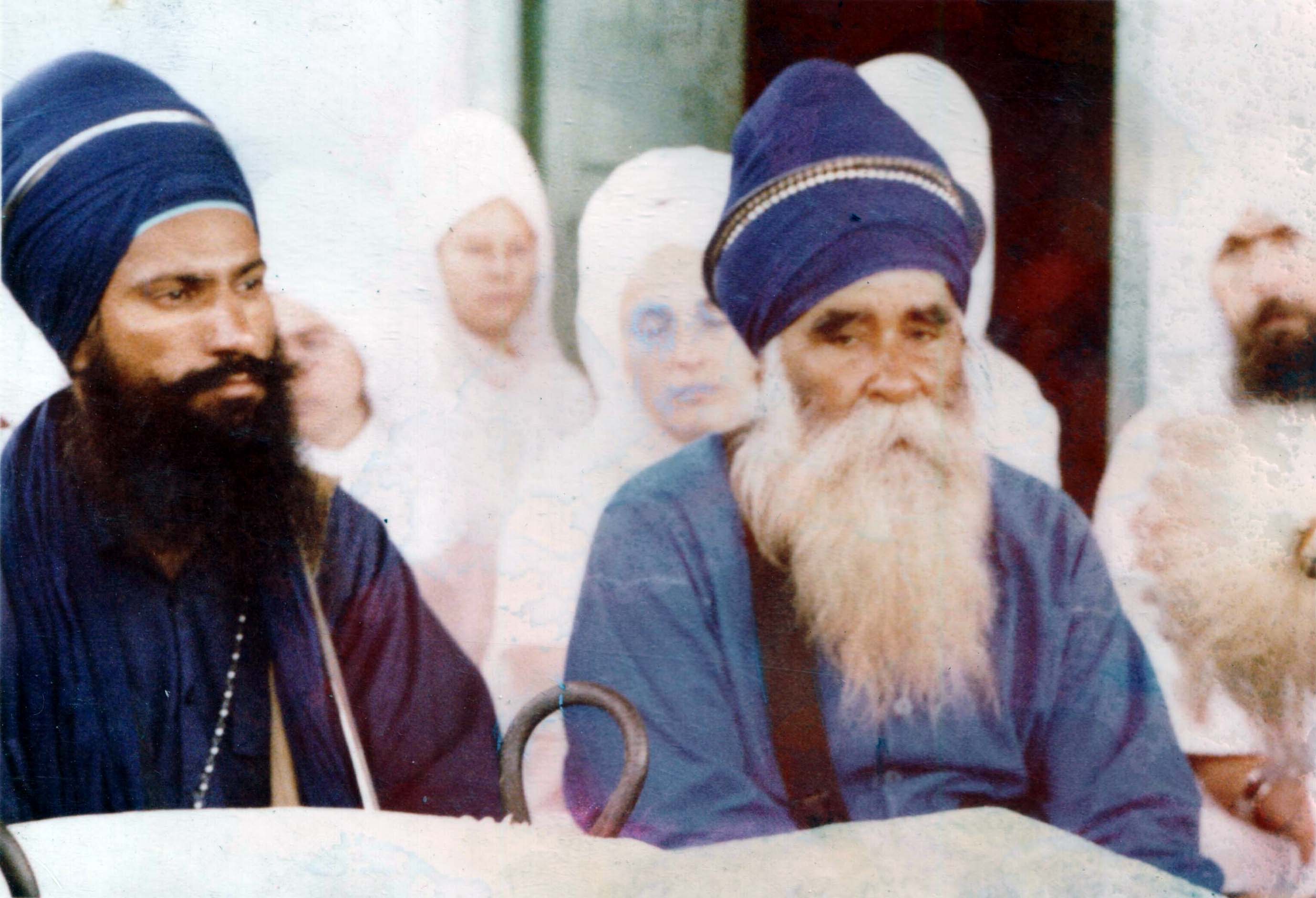 Seeing the lack of Sikhi in villages and the rapidly increasing drug and alcohol addiction across Punjab, Bhai Fauja Singh Jee decided to try tackle the problem and so the ‘Chalda Vaheer’-a group of Singhs and Singhniya that would travel village to village spreading Sikhi was formed. There wasn’t always a rush of people prepared to sacrifice their time for this Seva, so sometimes it would just be Bhai Sahib and Bibi Jee travelling. Other Gursikhs that would do Parchaar in the Jatha were Master Niranjan Singh Jee Gurdaspur, Shaheed Bhai Keval Singh Jee, Shaheed Bhai Avtar Singh Jee, Giani Hazara Singh Jee, Bhai Hazura Singh Jee, Bhai Baksheesh Singh Jee, Bhai Kulwant Singh Babbar (aka Mengha Singh), in addition to many other Gursikhs whom would take it in turns to attend the Parchaar.

The Singhs would make great effort to travel, the Vaheer started on bicycles. Bhai Fauja Singh Jee would have a vaja on the front of their cycle, with Bibi Jee sat behind, Master Niranjan Singh Jee would have his tabla in a bag over his shoulder and ride his cycle with a Singh sat on the back and other Singhs would take their own bicycles. As Chalda Vaheer Jatha became more apparent, they started travelling by borrowing tractors with a cart attached and then using the train services for longer journeys. Soon Bhai Sahib realised they needed a fund for the Chalda Vaheer  to carry on, so they implemented a rule; the transport would only move whilst everyone was awake and reading Baani or doing Gurmat Veechar, if anyone fell asleep Bhai Sahib would take five rupees from them as a penalty, the same rule applied to Bibi Amarjeet Kaur only her penalty was ten rupees. Bhai Sahib’s sense of humour was inspiring, even through such rules their love for Guru Sahib and Gur Shabad was reflected.

When travelling to villages, people were not very welcoming seeing a group of Nihangs randomly set up camp and so the Chalda Vaheer Jatha would prepare their own food. The Singhs would have Langar and wander around the village familiarising themselves with the residents,  why they were visiting the Pind and why they were building relationship with the locals. The next day they would have Amritvela Simran, Nitnem and Asa Di Vaar but not much Sangat would attend as people were not accustomed to this. In the day they would again try and meet villagers, Bhai Sahib would inspect the local’s fields and give them advice on what they could do to have better farms, crops and soil etc. He would tell all the farmers and their families to come to the Gurdwara in the evening, where he would give farming advice. Once the locals had all gathered, they would then do Simran, Keertan, lectures on Gurmat and inspire the Sangat. Bhai Keval Singh would teach Shastar Vidiya to the local youth and build their interest, he would show them Shastar that he had handmade himself. Bibi Amarjeet Kaur inspired the women and girls with stories about Sikh women and showing them how blissful it was to live in Rehat.

Shaheed Bhai Fauja Singh Jee was a unique Gursikh, for them Parchaar was through their actions. People started to build relationships with the Gursikhs and would call them to stay in their homes, by watching their lifestyle these people would become inspired with a thirst for Amrit and so Amrit Sanchaars would be held in the villages. Bhai Sahib Jee encouraged children to do Keertan and learn Baani, they would set targets for children to learn certain Baani such as Japji Sahib and Chaupai Sahib, then rewarded them with prizes if they remembered it by the next time they met. 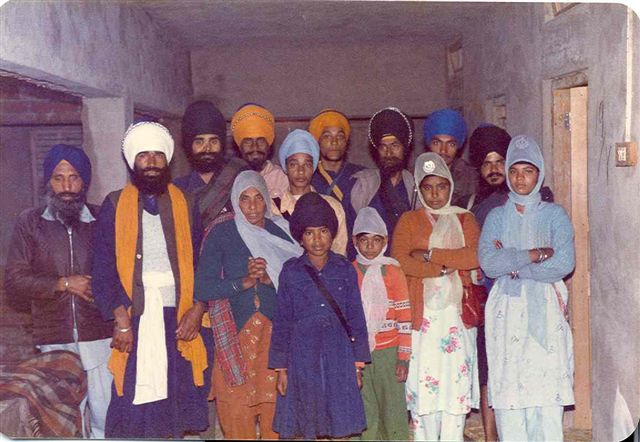 Bhai Sahib Jee took virtues from all Gursikhs, there is not one Jathebandee with whom Bhai Sahib Jee did not do Sangat with. Bhai Fauja Singh Jee revolutionised the way in which Gurmat was taught. Today we attend many Khalsa camps and Sikhi camps; however it was Bhai Sahib Jee who introduced Parchaar to be done in such a way.

“A Nagara (war drum) would play at Amritvela and we would have to throw our blankets off and run to have ishnaan (bath) in the river, everyone would gather once they were dressed to do Simran. Bhai Sahib would do Simran like a lion- very loud and sing lines of Gurbani to fuel the concentration of Gursikhs. After Simran, everyone would do Nitnem, including Sukhmani Sahib and Asa Di Vaar Keertan. We would then have breakfast and exercise and have Gatka training. During the day we would learn the correct pronunciation of Gurbani, Dulla Veer Jee would teach Keertan and tabla and there would be Panthic Veechaar during the day with the elders, who would talk about spirituality along with politics and the future of the Panth. In the evening there would be Simran, Rehras Sahib, Keertan and Sukhasan , everyone would eat langar together then rest. People didn’t want to leave this place, it was heaven. I remember one Singh who came to stay, he stayed so long his Uncle came to get him, then his Uncle enjoyed it so much he stayed, so the Singh’s Father had to come to get them both in the end, this was the magic of Khalsa Farm”-Interview with a Singh who attended Khalsa Farm, 2006. 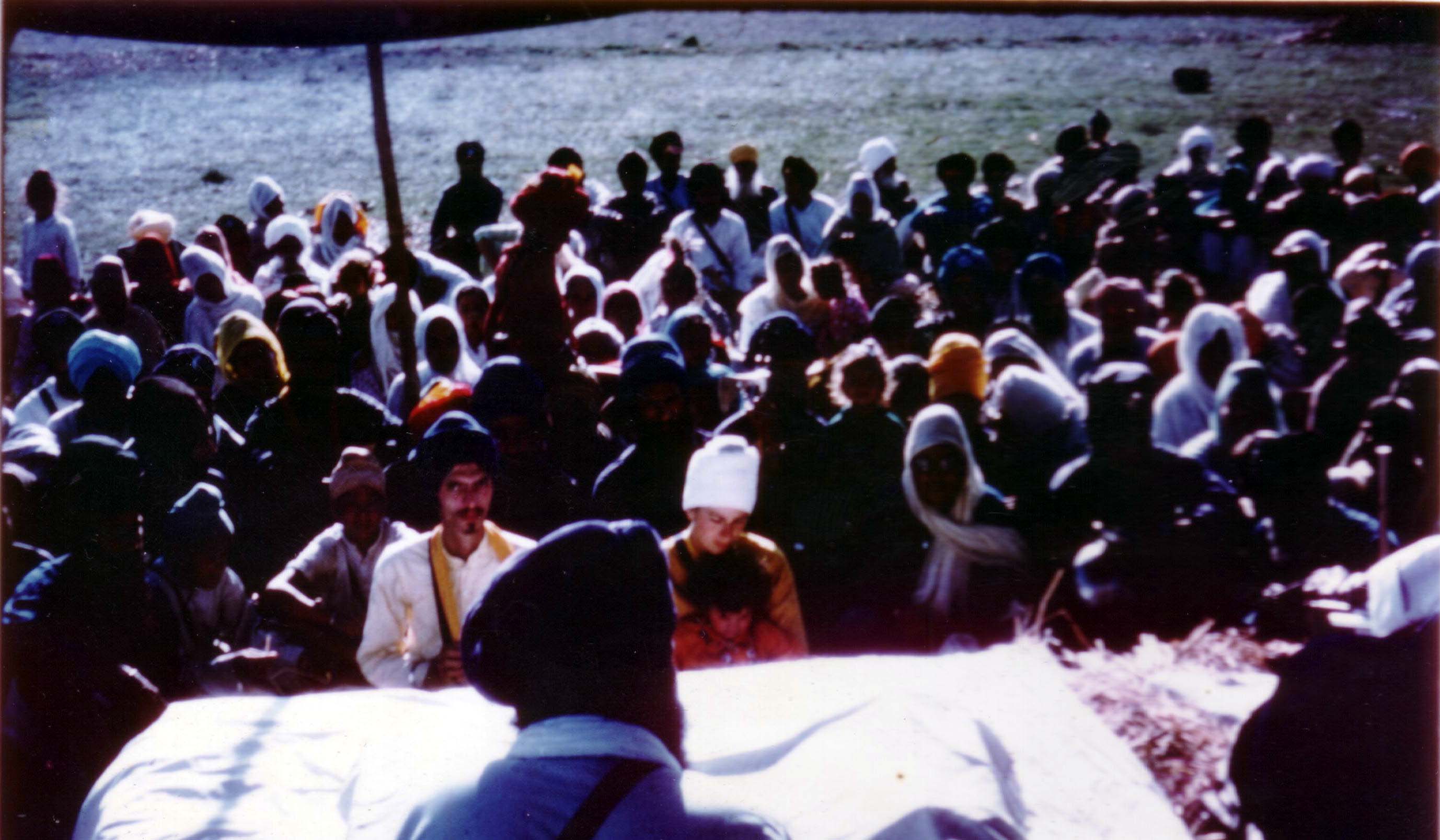 In a recent interview with Bibi Amarjeet Kaur Jee (wife of Bhai Fauja Singh Jee), she told us that when Bhai Sahib Jee was taken to Gurdaspur prison for protecting the honour of a SInghni, she went in to see the Superintendent and when seeing her in Sikhi saroop he said “you look like such an honourable lady, what must Fauja Singh be like?” under the impression that Bhai Sahib was a random uneducated Nihang from a village. Bibi Jee replied “He is a Nihang Singh, who is professional and probably earns more than you.” Overtime the Superintendent was so inspired by Bhai Sahib’s character that they became good friends. The Superintendent told Bibi Jee that he fears Bhai Sahib when they are in their blue Baana. In prison Bhai Fauja Singh Jee refused to stop wearing blue Baana at first, but Bibi Jee later convinced them that the other inmates will become closer with them, if they would wear a white Chola and so they agreed.

Whilst in prison Bhai Sahib ensured he kept up his seva of Parchaar, inspiring many within the jail; Bhai Sahib would spend much of their time in deep meditation and would organise weekly divaans in the prison. In prison Bhai Fauja Singh Jee also organised a smagam, in which Akhand Keertanee Jatha and the American Sikhs all came to do Keertan, Bhai Sahib Jee gave a lecture in both English and Punjabi and with grace of Vaheguroo an Amrit Sanchaar was also organised, with many of the prisoners inspired to take Amrit.

With Bhai sahib carrying on Parchaar inside prison, Chalda Vaheer Jatha continued travelling from village to village to do Parchaar. The American Sikhs also joined the Jatha and helped with the Parchaar, many Punjabi’s became enthused to see how people from another culture had adopted the Sikh Dharam (Faith) and were in Baana and could read Baani. 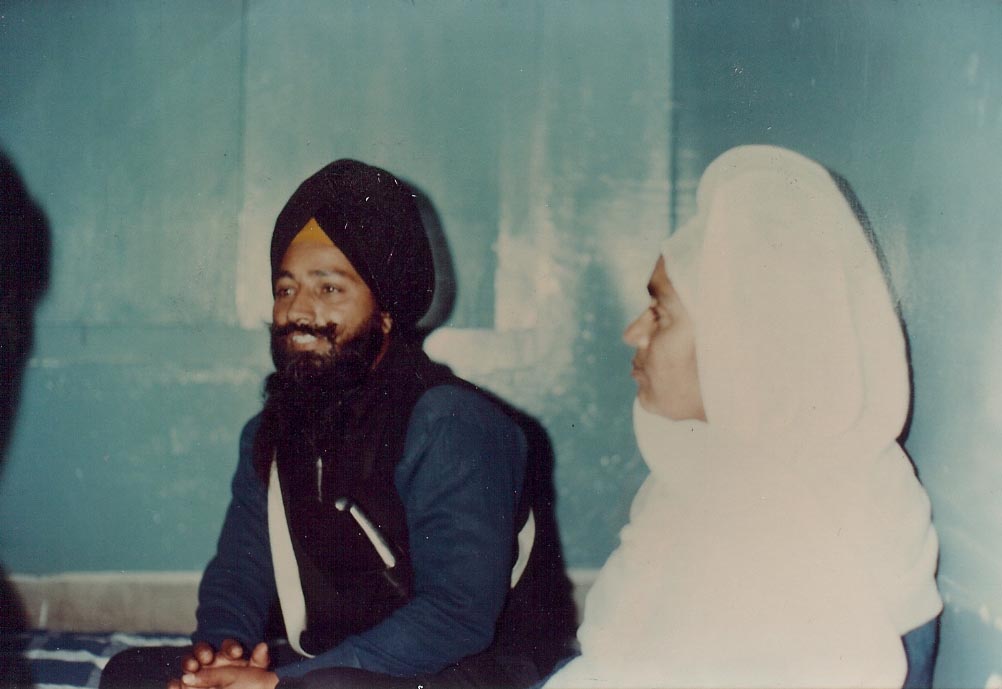 Bhai Fauja Singh Jee’s shaheedi is one that has and will continue to inspire many people, generations both old and young and still to come. It is their shaheedi and way of thinking that inspired another Panth Premi- Bhai Sahib Bhai Rajinder Singh Jee to dedicate their life to Parchaar seva and continue Chalda Vaheer outside of India, as Chalda Vaheer Jatha International.

The biggest lesson to learn from everything Shaheed Bhai Fauja Singh Jee stood for is that; Parchaar is not bound to being something that is taught, it is not throwing bits of information about Sikhi around. YOU are Parchaar, as Sikhs of Sri Guru Nanak Dev Sahib Jee Maharaj WE are Parchaar. Our everyday actions, the language we use, the facial and bodily expressions we wear, the moods we adorn ourselves with, the interactions we have; EVERYTHING we do and say is and should be a form of Parchaar- especially for those Singh and Singhniya whom carry Maharaj’s Gursikhi saroop. When people look at Gursikhs as individuals who have Guru Sahib Jee living inside of them, they will expect nothing short of love. Therefore it is this love we must implement into each aspect of our physical being; so that we are able to connect with others and with this love, people may be able to connect with The True Guru.

We have 24 guests and no members online